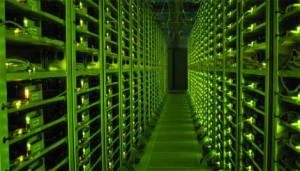 Imagine a life without the internet. You can’t! That’s how inextricably enmeshed the internet is in our lives. Kids learn to play “angry birds” on the PC before they learn to say “duh”, school children hobnob on Facebook and many of us regularly browse, upload photos, watch videos and do a dozen other things on the internet.

During the early days the internet was most probably used for document retrieval, email and browsing. But with the passage of time the internet and the uses of the internet have assumed gigantic proportions. Nowadays we use the internet to search billions of documents, share photographs with our online community, blog and stream video. So, while the early internet was populated with large computers to perform the tasks, the computations of the internet of today require a substantially larger infrastructure. The internet is now powered by datacenters. Datacenters contain anywhere between 100s to 100,000s servers. A server is a more beefed up computer that is designed for high performance sans a screen and a keyboard. Datacenters contain servers stacked over one another on a rack.

These datacenters are capable of handling thousands of simultaneous users and delivering results in split second. In this age of exploding data and information overload where split second responses and blazing throughputs are the need of the hour, datacenters really fill the need. But there is a dark side to these data centers. The issue is that these datacenters consume a lot of energy and are extremely power hungry besides. In fact out of a 100% of utility power supplied to datacenter only 6 – 12 % is used for actual computation. The rest of the power is either used for air conditioning or is lost through power distribution.

In fact a recent article “Power, pollution and the Internet” in the New York Times claims that “Worldwide, the digital warehouses use about 30 billion watts of electricity, roughly equivalent to the output of 30 nuclear power plants.”  Further the article states that “it is estimated that Google’s data centers consume nearly 300 million watts and Facebook’s about 60 million watts or 60 MW”

For e.g. It is claimed that Facebook annually draws 509 million kilowatt hours  of power for its  data centers  (see Estimate: Facebook running 180,000 servers). This article further concludes “that the social network is delivering 54.27 megawatts (MW) to servers” or approximately 60 MW to its datacenter.  The other behemoths in this domain including Google, Yahoo, Twitter, Amazon, Microsoft, and Apple all have equally large or larger data centers consuming similar amounts of energy.  Recent guesstimates have placed Google’s server count at more than 1 million and consuming approximately 220 MW. Taking a look at the power generation capacities of power plants in India we can see that 60 MW is between to 20%-50% of the power generation capacity of  power plants  while 220 MW is entire capacity of medium sized power plants (see List of power stations in India”)

One of the challenges that these organizations face is the need to make the datacenter efficient. New techniques are constantly being used in the ongoing battle to reduce energy consumption in a data center. These tools are also designed to boost a data center’s Power Usage Effectiveness (PUE) rating. Google, Facebook, Yahoo, and Microsoft compete to get to the lowest possible PUE measure in their newest data centers. The earlier datacenters used to average 2.0 PUE while advanced data centers these days aim for lower ratings of the order of 1.22 or 1.16 or lower.

In the early days of datacenter technology the air-conditioning systems used to cool by brute force. Later designs segregated the aisles as hot & cold aisle to improve efficiency. Other technique use water as a coolant along with heat exchangers. A novel technique was used by Intel recently in which servers were dipped in oil. While Intel claimed that this improved the PUE rating there are questions about the viability of this method considering the messiness of removing or inserting new circuit board from the servers.

Datacenters are going to proliferate in the coming days as information continues to explode. The hot new technology “Cloud Computing” is nothing more that datacenters which uses virtualization technique or the ability to run different OS on the hardware improving server utilization.

Clearly the thrust of technology in the days to come will be on identifying renewable sources of energy and making datacenters more efficient.

2 thoughts on “The dark side of the Internet”