“The computer is a dumb machine. It needs to be told what to do at every step”. How often have we heard of this refrain from friends and those who have only an incidental interaction with computers?  To them a computer is like a ball which has to be kicked from place to place. These people are either ignorant of computers, say it by force of habit or have a fear of computers. However this is so far from the truth.  In this post, my 100th, I come to the defense of the computer in a slightly philosophical way.

The computer is truly a marvel of technology. The computer truly embodies untapped intelligence. In my opinion even a safety pin is frozen intelligence. From a piece of metal the safety pin can now hold things together while pinning them, besides incorporating an aspect of safety.

Stating that the computer is a dumb machine is like saying that a television is dumb and an airplane is dumber.  An airplane probably represents a modern miracle in which the laws of flight are built into every nut and bolt that goes into the plane. The electronics and the controls enable it to lift off, fly and land with precision  and perform a miracle in every flight.

Similarly a computer from the bare hardware to the upper most layer of software is nothing but layer and layer of human ingenuity, creativity and innovation. At the bare metal the hardware of the computer is made up integrated chips that work at the rate of 1 billion+ instructions per second. The circuits are organized so precisely that they are able to work together and produce a coherent output, all at blazing speeds of less than a billionth of a second.

On top of the bare bones hardware we have some programs that work at the assembly and machine code made of 0’s and 1’s. The machine code is nothing more than an amorphous strings of 0’s and 1’s. At this level   the thing that is worked on (object) and the thing that works on it (subject) are indistinguishable. There is no subject and object at this level. What distinguishes then is the context.

Over this layer we have the Operating System (OS) which I would like to refer to as the mind of the computer. The OS is managing many things all at once much like the mind has complete control over sense organs which receive external input. So the OS manages processes, memory, devices and CPU (resources)

You say human beings are capable of thought. So what is thought but some sensible evaluation of known concepts? In a way the OS is also constant churning in the background trying to make sense of the state of the CPU, the memory or the disk.

Not to give in I can hear you say “But human beings understand choice”. Really! So here is my program for a human being

If provoked
Get angry

If insulted
Get hurt

Just kidding! Anyway the recent advances in cognitive computing now show it is possible to have computers choose the best alternative. IBM’s Watson is capable of evaluation alternative choices.

Over the OS we have compilers and above that we have several applications.
The computer truly represents layers and layers of solidified human thought. Whether it is the precise hardware circuitry, the OS, compilers, or any application they are all result of human thought and they are constantly working in the computer.

So if your initial attempt to perform something useful did not quite work out, you must understand that you are working with decades of human thought embodied in the computer. So your instructions should be precise and logical. Otherwise your attempts will be thwarted. 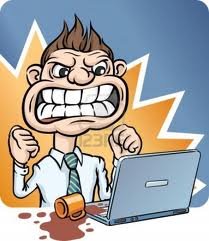 So whether it’s the computer, the mobile or your car, we should look and appreciate the deep beauty that resides in these modern conveniences, gadgets or machinery.

2 thoughts on “The computer is not a dumb machine!”