Here is a slightly wild idea of mine

Generally in enterprises the network bandwidth available to employees is greatest at the start of the working day and progressively becomes bad as the day progresses. The bandwidth available improves again later in the day. The reason is that the bandwidth demand is highest during the middle portions of the day usually between 10 am – 5pm when the number of employees are the highest. The poor response times during the day are common to many enterprises as the network infrastructure is stretched beyond its designed capacity

This idea visualizes the user of a network devoice (Time Zone –Traffic Director Switch) that borrows bandwidth based on the time-of-day and the bandwidth shortage in a particular region. This device effectively borrows the idle network resources (routers, hubs, switches) from other geographical regions thus resolving the bandwidth issue.

In large global organizations, office are spread throughout the world. There will be typical daytimes and night times.  Night time usages will be minimal unless the office works on shifts

Large enterprises typically use leased lines between their various offices spread across the globe. Each of the regional offices will have its own set of routers, Ethernet switches, hubs etc.

In a typical situation we can view that the enterprise’s region as the center of the network resources (hubs, routers, switches) in its own region. Simplistically we can represent this as shown in Fig 1

This post visualizes the realization of a network device namely the Time Zone-Traffic Director Switch which effectively borrows bandwidth based on the time-of-day and the bandwidth shortage in a particular region.,

This device effectively borrows the idle network resources (routes, hubs switches) from other geographical regions this resolving the bandwidth issue. Such a network device can be implemented using the Open Flow Protocol which can virtualize the network resources

In large cloud computing systems like Facebook, Google, Amazon, which have data centers spread throughout the world, traffic is directed to a data center closest to the user to minimize latency, In this scheme the use of the network resources in other geographical regions may introduce network latencies but will be economically efficient for the enterprises.

This is how the scheme will have to be realized

This can be represented in the following diagram 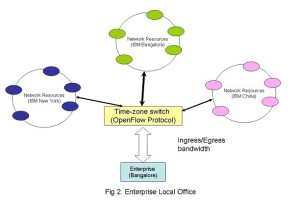 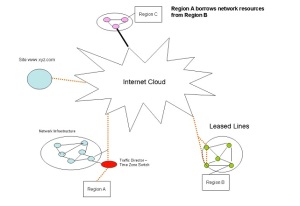 The entire scheme can be represented by the flow chart below

However the delay will be more than compensated by the increase in the bandwidth available to the end user. This idea will simultaneously solve the problem of the bandwidth crunch while efficiently and effectively utilizing the network resources across the entire enterprise. This scheme will also reduce the organization CAPEX and OPEX as resources are used more efficiently.