To Hadoop, or not to Hadoop: that is the question.  In many  of my discussions I find that Hadoop with its implementation of Map-Reduce crops  ups time and time and again.  To many Map-Reduce is the panacea for all kinds of performance evils. It appears that somehow using the Map-Reduce in your application will magically transform your application into a high performing, screaming application.

The fact is the Map-Reduce algorithm is applicable to only certain class of problems.  Ideally it is suited to what is commonly referred to as “embarrassingly parallel” class of problems.  These are problems that are inherently parallel for e.g. the creation of inverted indices from web crawled documents.

Map-Reduce is an algorithm that has popularized by Google. The term map –reduce actually originates from Lisp in which the “map” function takes a list of arguments and performs the same operation on all of its argument. The” reduce” then applies a common criterion to pick a reduced set of values from this list. Google uses the Map-Reduce to create an inverted index. An inverted index basically provides a mapping of a word with the list of documents in which it occurs. This typically happens in two stages. A set of parallel “map” tasks take as input documents, parse them and emits a sequence of (word, document id) pairs. In other words, the map takes as input a key value pair (k1, v1) and maps it into an intermediate (k2, v2) pair. The reduce tasks take the pair of (word, document id), reduce them, and emit a (word, list {document id}). Clearly applications, like the inverted index, make sense for the Map-Reduce algorithm as several mapping tasks can work in parallel on separate documents. Another typical application is counting the occurrence of words in documents or the number of times a web URL has been hit from a traffic log. 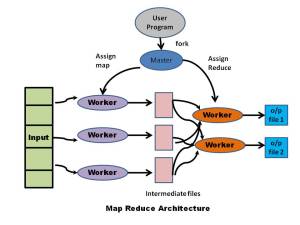 The key point in all these typical class of problems is that the problem can be handled in parallel. Tasks that can execute independently besides being inherently parallel are eminently suitable for Hadoop processing. These tasks work on extraordinarily large data sets.  This is also another criterion for Hadoop worthy applications.

Hadoop uses a large number of commodity servers to execute the algorithm. A complementary technology along with Hadoop is the Hadoop Distributed File System (HDFS). The HDFS is a storage system in which the input data is partitioned across several servers. Google uses the Google File System (GFS) for its inverted index and page ranking algorithm.

However several real world applications do not fall into this category where we can parallelize the execution of the application. For example an e-retail application which allows users to search for book, electronic products, add to shopping card and finally make the purchase, in my opinion,  is not really suited for Hadoop as each individual transaction is separate  and typically has its own unique sequential flow. An Ad serving application also is not ideally suited for Hadoop. Each individual transaction has its own individual flow in time.

However on closer look we can see that there are certain aspects of the application that are conducive to Hadoop based Map-Reduce algorithm. For e.g. if the application needs to search through large data sets for example the e-retail application will have tens of thousands of electronic products and books from different vendors with their own product id.  We could use Hadoop to pre-process these large amounts of data, classify and create smaller data sets which the e-retail or other application can use. Hadoop is a clear winner when large data sets have to searched, sorted or some subset selected from.

In these kinds of applications Hadoop has a clear edge over other types as it can really crunch data. Hadoop is also resilient to failures and is based on the principle of “data locality” which allows the “map” or “reduce” to use data stored locally on its sever or in a neighboring machine.

Hence while Hadoop is no silver bullet for all types of applications if due diligence is performed we can identify aspects of the application which can be crunched by Hadoop.