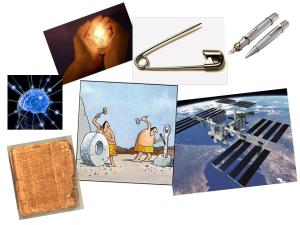 Mankind’s progress is measured by the depth of creativity and the number of innovations in every period. The human race has an irresistible urge to make things better, faster, cheaper. While modern technological marvels like the airplane, the laptop or an LCD TV continue to amaze us, people in these industries will most probably concur that most of the developments that have happened in these domains have been in small increments over long periods of time. Barring a few breakthrough discoveries like calculus by Isaac Newton or the Theory of General Relativity by Albert Einstein most of the innovations that have happened have been incremental and are the result of careful analysis, sudden insight after several days of thoughtful deliberation, or sound judgment.

Creativity need not be sensational nor even path breaking. Creative ideas can just be incremental. Not all ideas happen in the spur of the moment or are serendipitous.

Innovation and creativity can be deliberate and well thought-out. There is neither a silver bullet for innovation nor a magic potion to inspire creativity. However there are certain eternal principles of innovation that keep repeating time and time again.  Almost all innovations are based on the constant need for simplicity, reliability, being disaster proof, extendibility or safety. “Invention is the child of Necessity” and innovations happen when there is strong need for it. This article explores some of the eternal principles behind the various innovations of the ages.  It looks at the motivation and the thought processes behind those inventions. Various common day-to-day gadgets, processes or devices are explored to determine the principles behind the particular improvement or advancement.

Several innovations are based on the principle of simplicity. Smaller, simpler, faster has been the driver of several innovations. .For e.g. RISC (Reduced Instruction Set Computer) design strategy is based on the insight that simplified instructions can provide higher performance. The philosophy behind this is that simplicity enables much faster execution of each instruction as opposed to CISC (Complex Instruction Set Computer). In favor of simplicity, are regular English alphabet text based protocols like HTTP, SIP as opposed to the more esoteric telecommunication or data communication protocols which send and receive messages in binary 1’s & 0’s and have complicated construction rules. The tradeoff for simplicity, however, is the consequent increase in bandwidth or the increase in the communication pipe capacity. To counter the increase in bandwidth there are several innovative techniques to compress the text message. These compression algorithms compress the text messages before sending them on the communication pipe. These compressed messages, on reception are uncompressed to obtain the original message.

Some incremental changes result from the need to increase safety. It is based on the principle of disaster-proofing the devices or to provide safety to us human beings and protect us from freak accidents. For e.g. the safety pin is an incremental improvement over the regular pin. The electrical fuse and the safety valve in a pressure cooker are two such innovative improvements that are based on the principle of safety. The electrical fuse is an interesting innovation and is based on the principle that when there is an abnormal surge of current in the fuse wire, the resulting heat produced will melt the wire, thus breaking the electrical connection. This protects the gadget and the more expensive internal circuits from serious damage. Also the safety valve in the pressure cooker will give way if the pressure inside the cooker goes beyond safety limits. This protects the cooker from bursting due to excess pressure and causing damage to humans and property.

Some innovations are based on the principle of sound engineering judgment and to large extent common sense. One such innovation is the LRU technique of an Operating System like Windows or UNIX. This technique or algorithm helps the computer in deciding which specific “page” or section of a large program in the computer’s Random Access Memory (RAM) should be moved out or swapped to the disk (only a limited number of pages can be in the RAM at a time). The computer makes this decision based on the “Least recently Used” (LRU) technique. Obviously, amongst many pages in the computer’s RAM, the page that has been used the least, in the recent past, can be moved out to the disk under the assumption that it less likely to be used in the future.

The move from vacuum-tube based electronics for e.g. the diode, triode to the more compact, smaller & less power consuming semi-conductor devices was a major paradigm shift in the realm of electronics. So also the move from cassette tapes to compact discs (CDs) and from VHS video tapes to the now compact DVDs were game changing innovations. Similarly the move from film-based cameras to the now digital cameras is a huge paradigm shift. Innovations which are based on a paradigm different from an existing philosophy truly require an out-of-box or a lateral thinking coupled with great perceptiveness and knowledge of the field.

In the mid 19th century many great and powerful inventions/ discoveries were made by giants like Faraday, Lenz, Maxwell, and Fleming in the field of Electro Magnetism. One the finding was that, there was a production of a voltage, and hence a current, across a conductor situated in a changing magnetic field. This consequently led to the invention of the Electro-mechanical Generator for generating electricity. Conversely, it was found that if a current carrying conductor is located in an external magnetic field perpendicular to the conductor, the conductor experiences a force perpendicular to itself and to the external magnetic field. This principle, which results in a force on the conductor, promptly led to the invention of the still prevalent Electro-mechanical Motor.

There are many inventions which are based on the cause-effect-cause principle. In this category of innovations the cause & effect are interchanged in different situations to handle different problems. For e.g. thermal energy may be converted to electrical energy as in the case of a steam turbine. Or conversely electrical energy may be converted to heat for e.g. in the electric cooker. Similarly there are inventions, where light energy and electrical energy are transformed based on the specific need.   A recent investigation into the possibility of a remote power outlet led the author on an interesting journey. Since electrical energy can be converted to microwaves (microwave cooker) the author wondered whether the reverse is possible i.e. could microwaves be transmitted across space and at the receiving end be converted to electricity. An internet search showed that this is very much possible and has been thought of more than a decade back. This is known as Microwave Power Transmission (MPT). However practical applications of this are not possible because of the radiation hazards of microwaves. However, MPT is used in outer space.

An excellent example of this is the room Air Conditioner (A/C). The room air-conditioner maintains a constant temperature. If there is an increase in room temperature it increases the cooling and if there is a drop in temperature it decreases the rate of cooling. There are many day to day inventions that are based on the principle of feedback where the result is fed back and manipulated internally such that resultant output is maintained at a constant level.

Vacuum tubes and the semi-conductor transistor can be made to toggle between 2 distinct states (on & off). This property and the insight and knowledge of  binary arithmetic soon led to utilization of electronic devices for binary arithmetic. This soon led to the development of electronic circuits for simple addition, subtraction, and multiplication etc of binary numbers. Invention after invention and innovation after innovation led to development and metamorphosis of the now ubiquitous Personal Computer.

In conclusion innovations can be incremental. There are numerous examples of human cleverness and innovation all around us. One just needs to notice and pretty soon we begin to appreciate human ingenuity. We need to reflect on the thought processes behind each incremental innovation which have made our lives more pleasant and convenient. Hopefully, as we become more aware, someday, some of us may have a defining “eureka” moment.

One thought on “The Science of Innovation”