Web Applications have challenges that are unique to the domain of the web. The key differentiating fact between internet technologies and other technologies is the need to scale up to handle sudden and large increases in traffic. While telecommunication and data communication also have the need to handle high traffic these products can be dimensioned on some upper threshold. Typical web applications have the need to provide low latencies, handle large throughput and also be extremely scalable to changing demands.

The ability to scale seems trivial. It appears that one could just add more CPU horsepower and throw in memory and bandwidth in large measure to get the performance we need. But unfortunately this is not as simple as it appears. For one, adding more CPU horsepower may not necessarily result in better performance. A badly designed application will only improve marginally.

Some applications are “embarrassingly parallel”. There is no dependency of one task on another.  For example if the task is to search for a particular string in documents or one that requires the conversion from  AVI to MPEG format then this can be done in parallel. In a public cloud this could be achieved by running more instances.

However, most real world applications are more sequential than parallel. There is a lot of dependency of data between the modules of the application.  When multiple instances have to run  in a public cloud the design considerations can be quite daunting.

For example if we had an application with parts 1,2,3,4 as follows

Now let us further assume that this is a web application and thousands of requests come to it. For simplicity sake, if we assume that for each request there is counter that has to be incremented.  How does one keep track of the total requests that are coming to application?  The challenge is how to manage such a global counter when there are multiple instances.  In a monolithic application this does not pose a problem. But with multiple instances handling web requests, each having its own copy of this counter the design becomes a challenge

Each instance has its own copy of the counter which it will update based on the requests that come to that instance through a load balancer. However, how does one compute the total number of requests that e come to all the instances 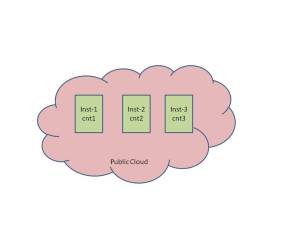 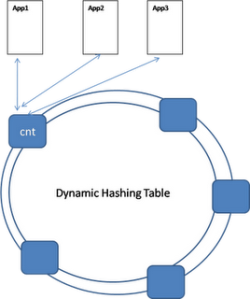