“If you squint the right way, you will notice there are graphs are everywhere”. This is a line from a Research blog at Google “Large scale graph computing at Google”.  Transportation problems, disease outbreaks, computer networks and social networks all use graph in one way or another. Social networks of today, with friends of  Facebook, followers in Twitter and connections in LinkedIn are all clearly graphs. The billions of pages in the World Wide Web with incoming and outgoing links is a massive directed graph.

The Map Reduce paradigm with its message passing mechanism is not particularly well suited for this purpose. Map Reduce is capable of processing several documents, images, or matrices in parallel. But handling directed graphs with Map-reduce the combiners/reducers have to wait for the mappers to finish their tasks.  In Pregel programs are executed as a sequence of iterations in which each vertex receives messages sent to it in the previous iteration, execute code, and send messages to other vertices. Each vertex can  modify its state and the topology of the graph

Here is a the model of the Pregel. 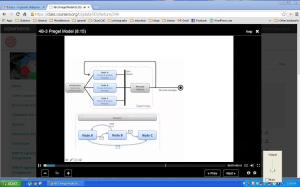 Pregel works on a sequence of iterations known as supersteps. In each superstep, S, each vertex will receive messages sent to it in the previous superstep S-1, executes a user-defined function specified for the vertex and sends messages to other vertices which they will receive in superstep S+1. The supersteps at all vertices are conceptually supposed to occur in parallel.  At each superstep the vertex can alter its state and the state of the outgoing edges.  The synchronicity of the model is what makes the model semantically manageable.

Pregel is realized on hundreds of commodty serves. The input to the Pregel model is a directed graph. During initialization the vertices are partitioned and each server receives a set of vertices. Each vertex is associated with a modifiable user defined value.

In each superstep each node computes the user defined function in parallel using the message sent to it in the previous superstep.  A vertex can modify its state, the outgoing edges or the topology of the graph.

Pregel has been used for a variety of different problems ranging from determining Page Rank, Shortest path etc. Vertices are first class citizens in Pregel.  Algorithms terminate by a process of voting to halt. When all vertices vote to halt then the computation in Pregel is assumed to have completed. The algorithm as a whole terminates when all the nodes have voted to halt and there are no messages in transit.

A simple example of how Pregel determines the maximum value is illustrated in the original Google research paper Pregel: A System for Large-Scale Graph Processing. 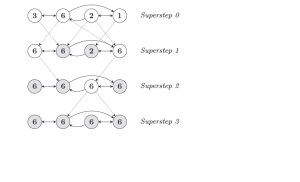 The pseudo code for this can be written as

In the above diagram the 4 vertices are initialized with the values shown. In superstep 1,

vertices 3 & 6 exchange their values. While 3 updates its value to 6 at its vertex, vertex 6 drops it and vote to halt. Similarly vertex 1 will update its value to 6 while vertex 2 which receives the value 1 will  vote to halt. In superstep 2vertex 2 will receive the value 6 from the vertex to its right, will be woken up and will update its value. In superstep 3 no messages are passed and all nodes would have now voted

Another interesting application is the evaluation of Page Rank. Page Rank essentially determines the probability of hitting a Page if a surfer clicked links on a Web page at random.

This can be done iteratively through Pregel as below

The Pregel computation is initialized such that in superstep 0, the value of each vertex

is 1 / NumVertices() .  In each of the first 30 supersteps, each vertex sends along each outgoing edge its tentative PageRank divided by the number of outgoing edges (see step B above).

Starting from superstep 1, each vertex sums up the values arriving on messages into sum and sets its own tentative PageRank to 0.15/NumVertices() + 0.85 * sum (see step A)  After reaching superstep 30, no further messages are sent and each vertex votes to halt.

Clearly the computation of PageRank of the pages indexed by Google in the World Wide Web consisting of billions of pages can be computed fairly efficiently by Pregel.

Pregel also includes ‘combiners’ that perform functions like SUM, MIN,MAX and AVERAGE to save computational steps.

Pregel also includes checkpointing where vertices save their states to revert to a previous state in case of failure.

The synchronous methodology of Pregel helps in avoiding issues of deadlocks and races which are prevalent in asynchronous communicating programs.