Neural Networks had their beginnings in 1943 when Warren McCulloch, a neurophysiologist, and a young mathematician, Walter Pitts, wrote a paper on how neurons might work.  Much later in 1958, Frank Rosenblatt, a neuro-biologist proposed the Perceptron. The Perceptron is a computer model or computerized machine which is devised to represent or simulate the ability of the brain to recognize and discriminate. In machine learning, the perceptron is an algorithm for supervised learning of binary classifiers

Initially it was believed that  Perceptrons were capable of many things including “the ability to walk, talk, see, write, reproduce itself and be conscious of its existence.”

Checkout my book ‘Deep Learning from first principles: Second Edition – In vectorized Python, R and Octave’. My book starts with the implementation of a simple 2-layer Neural Network and works its way to a generic L-Layer Deep Learning Network, with all the bells and whistles. The derivations have been discussed in detail. The code has been extensively commented and included in its entirety in the Appendix sections. My book is available on Amazon as paperback ($18.99) and in kindle version($9.99/Rs449).

This post implements the simple learning algorithm of the ‘Linear Perceptron’ and the ‘Sigmoid Perceptron’.  The implementation has been done in Octave. This implementation is based on “Neural networks for Machine Learning” course by Prof Geoffrey Hinton at Coursera

For every training case compute the activation output zi

This simple neural network is represented below

Sigmoid neuron learning procedure
zi = sigmoid(∑wixi  + b)
where sigmoid is

For every training case compute the activation output zi

This is shown below

I have implemented the learning algorithm of the Perceptron and Sigmoid Neuron in Octave. The code is available at Github at Perceptron.

I performed the tests on 2 different datasets 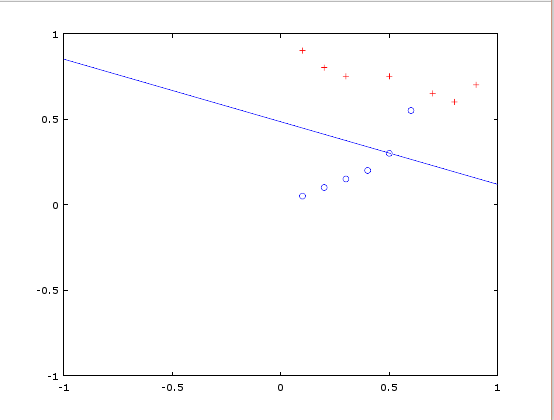 It can be seen that the Perceptron does work for simple linearly separable data. I will be implementing other more advanced Neural Networks in the months to come.