In this post I take a look at the gory crime scene across India to determine which states are the heavy weights in crimes. Who is the undisputed champion of rapes in a year? Which state excels in cruelty by husbands and the relatives to wives? Which state leads in dowry deaths? To get the answers to these questions I perform analysis of the state-wise crime data against women with the data  from Open Government Data (OGD) Platform India. The dataset  for this analysis was taken for the Crime against Women from OGD.

The data in OGD is available for crimes against women in different states under different ‘crime heads’ like rape, dowry deaths, kidnapping & abduction etc. The data is available for years from 2001 to 2012. This data is plotted as a scatter plot and a linear regression line is then fit on the available data. Based on this linear model,  the projected incidence of crimes likes rapes, dowry deaths, abduction & kidnapping is performed for each of the states. This is then used to build a table of  different crime heads for all the states predicting the number of crimes till the year 2018. Fortunately, R  crunches through the data sets quite easily. The overall projections of crimes against as women is shown below based on the linear regression for each of these states

Projections over the next couple of years
The tables below are based on the projected incidence of crimes under various categories assuming that these states maintain their torrid crime rate. A cursory look at the tables below clearly indicate the Uttar Pradesh is the undisputed heavy weight champion in 4 of 5 categories shown. Maharashtra and Andhra Pradesh take 2nd and 3rd ranks in the total crimes against women and are significant contenders in other categories too.

Full table: Total crimes.csv
Here is a visualization of ‘Total crimes against women’  created as a choropleth map 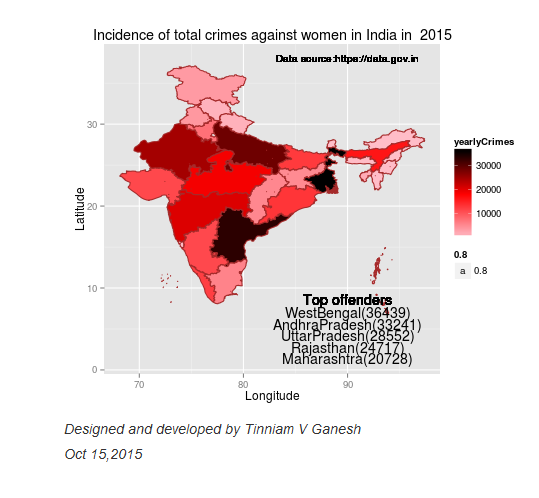 The implementation for this analysis was done using the  R language.  The R code, dataset, output and the crime charts can be accessed at GitHub at crime-against-women

The analysis has been completely parametrized. A quick look at the implementation is shown  below. A function state crime was created as given below

statecrime.R
This function (statecrime.R)  does the following
a) Creates a scatter plot for the state for the crime head
b) Computes a best linear regression fir and draws this line
c) Uses the model parameters (coefficients) to compute the projected crime in the years to come
d) Writes the projected values to a text file
c) Creates a directory with the name of the state if it does not exist and stores the jpeg of the plot there.

The above function is then repeatedly called for each state for the different crime heads. (Note: It is possible to check the read both the states and crime heads with R and perform the computation repeatedly. However, I have done this the manual way!)

and so on for all the states

Charts for different crimes against women

The plots for  Uttar Pradesh  are shown below

Dowry deaths in UP 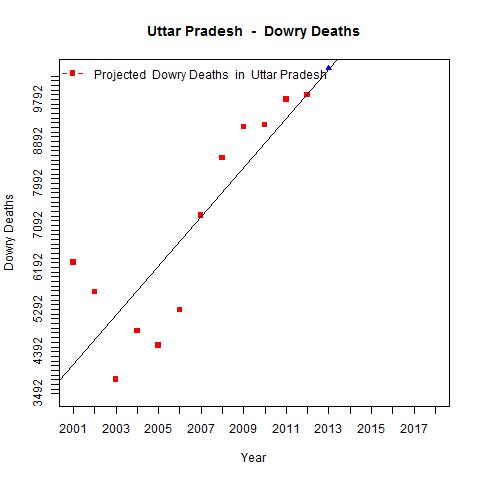 You can find more charts in GitHub by clicking Uttar Pradesh 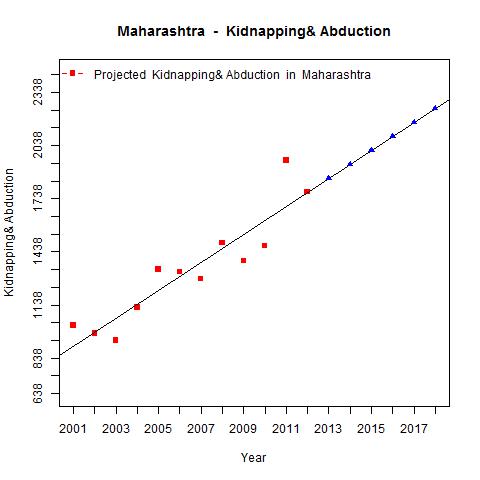 Total crimes against women in Maharashtra

The code, dataset and the charts can be cloned/forked from GitHub at crime-against-women

Let me know if you find any interesting patterns in the data.
Thoughts, comments welcome!


See also
My book ‘Practical Machine Learning with R and Python’ on Amazon
A peek into literacy in India: Statiscal learning with R

You may also like
– Analyzing cricket’s batting legends – Through the mirage with R
– What’s up Watson? Using IBM Watson’s QAAPI with Bluemix, NodeExpress – Part 1
– Bend it like Bluemix, MongoDB with autoscaling – Part 1