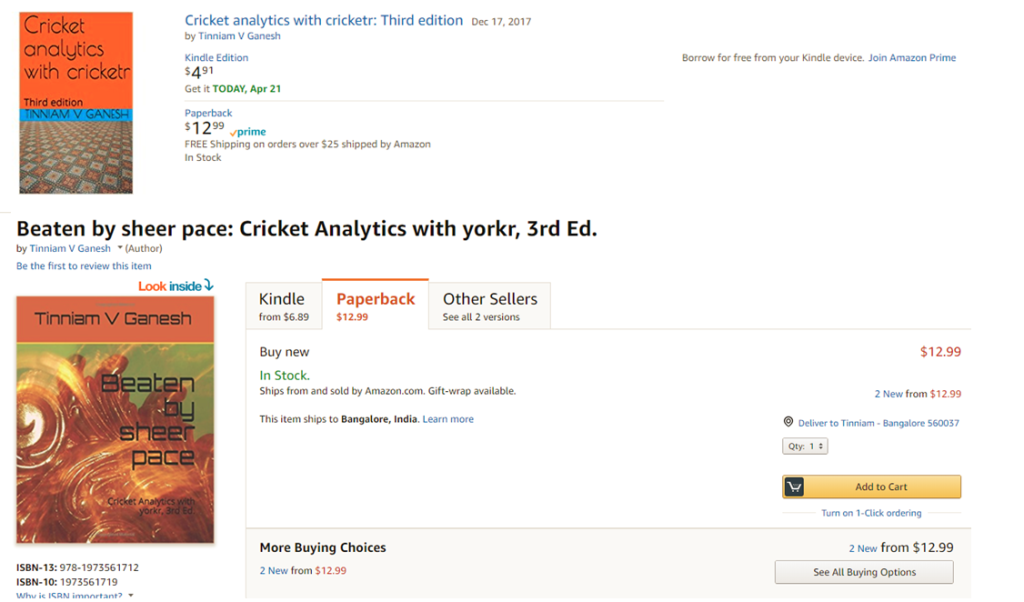 Googly is based on R package yorkr, and uses the data of all IPL matches from 2008 up to 2016, available on Cricsheet.

Googly can do detailed analyses of a) Individual IPL batsman b) Individual IPL bowler c) Any IPL match d) Head to head confrontation between 2 IPL teams e) All matches of an IPL team against all other teams.

With respect to the individual IPL batsman and bowler performance, I was in a bit of a ‘bind’ literally (pun unintended), as any IPL player could have played in more than 1 IPL team. Fortunately ‘rbind’ came to my rescue. I just get all the batsman’s/bowler’s performance in each IPL team, and then consolidate it into a single large dataframe to do the analyses of.

The Shiny app can be accessed at Googly

The code for Googly is available at Github. Feel free to clone/download/fork  the code from Googly

Based on the 5 detailed analysis domains there are 5 tabs

IPL Batsman: This tab can be used to perform analysis of all IPL batsman. If a batsman has played in more than 1 team, then the overall performance is considered. There are 10 functions for the IPL Batsman. They are shown below

IPL Bowler: This tab can be used to analyze individual IPL bowlers. The functions handle IPL bowlers who have played in more than 1 IPL team.

IPL match: This tab can be used for analyzing individual IPL matches. The available functions are

Head to head : This tab can be used for analyzing head-to-head confrontations, between any 2 IPL teams for e.g. all matches between Chennai Super Kings vs. Deccan Chargers or Kolkata Knight Riders vs. Delhi Daredevils. The available functions are

A. IPL Batsman
a. A Symonds : Runs vs Deliveries

Note: You can choose either team in the match from the drop down ‘Choose team’

Note: You can choose the partnership of either team in the drop down ‘Choose team’

b.  Rajashthan Royals overall Performance – Bowler vs batsman (Rank =2)
This is Vinay Kumar.

The Shiny app Googly can be accessed at Googly. Feel free to clone/fork the code from Github at Googly

For details on my R package yorkr, please see my blog Giga thoughts. There are more than 15 posts detailing the functions and their usage.

Also see my other posts