That is exactly how I feel when I write code in R. A few lines of R, lo behold, hundreds of rows and columns are magically transformed into  easily understandable graphs, regression curves or choropleth maps. (By the way, the song is a really cool! Listen to it if you have not heard it before). You really can do magic with R

In this post I do a deep dive into literacy in India The dataset is taken from Open Government Data (OGD) platform India was used for this purpose. This data is based on the 2001 census. Though the data is a little dated, it is extremely rich with literacy details across different age groups, and over all Indian States. The data includes the total number of persons/males/females who are in the primary, middle.matric, college,technical diploma, non-technical diploma and so on. In fact the data also includes the educational background of people in the districts in each state. I slice and dice the data across multiple parameters. I have created an interactive Shiny App which will provide very detailed visualization based on the parameters chosen

Do try out my interactive Shiny app : IndiaLiteracy

The entire code for this app is on GitHub. Feel free to download/clone/fork/modify or enhance the code – IndiaLiteracy

For analyzing   such a rich data set as the Census data of 2001, I create 4 tabs
1) State Literacy
2) Educational Levels vs Age
3) India Literacy and
4) District Literacy

A) State Literacy
This tab provides the age wise distribution of people (Persons/Males/Females) who attend educational institutions. This is shown as a barplot. The plot also includes the national average. In the plot below which is for entire India we see that the national average

The distribution of females attending primary school in the state of Haryana is shown. Also included is the national average. As can be seen there are options for (Total/Urban/Rural) against (Persons/Males/Females) and whether these people attend educational institutions are illiterate of literate.

I also have another option under “Who’ which is “All” This will plot the age wise distribution of males/females/persons in urban/rural or entire state.

B. Educational Institutions vs Age plot

This plot displays the the educational institutions attended by people in a particular age group. So for example in the state of Orissa for the 18 year age group we can see that there persons who are in (Primary, Matric, Higher Secondary, Non-Technical Diploma and Technical Diploma). The bar length for each color is the percentage of the total persons at that level of education

D. Literacy within a state
This tab plots a chorpleth map of literacy in the districts of a state. A sample plot for Karnataka is shown below 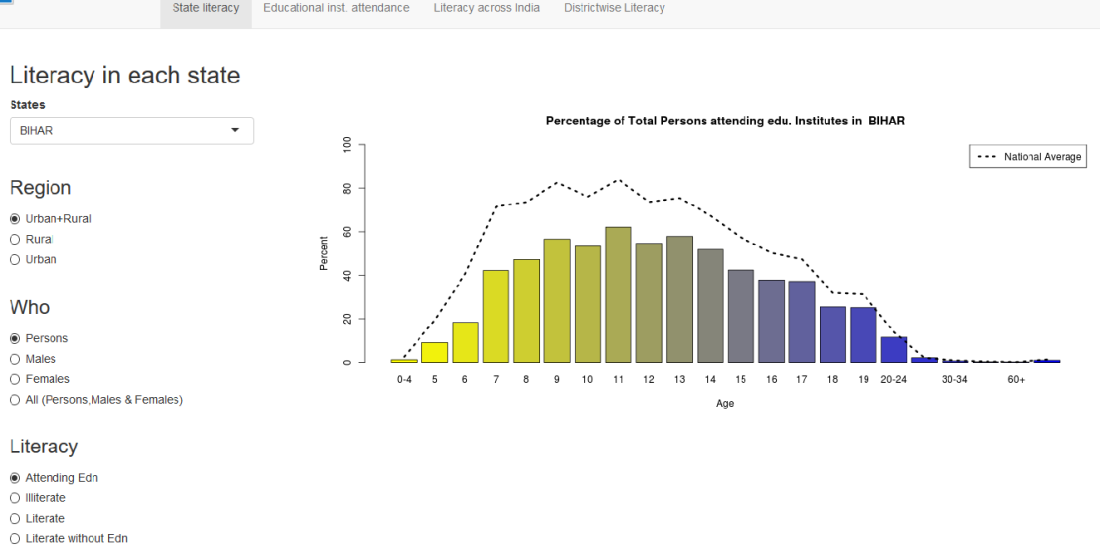 3) When we look at the number of persons attending educational institution across India the north-eastern states lead with Manipur, Nagaland and Sikkim in the top 3. 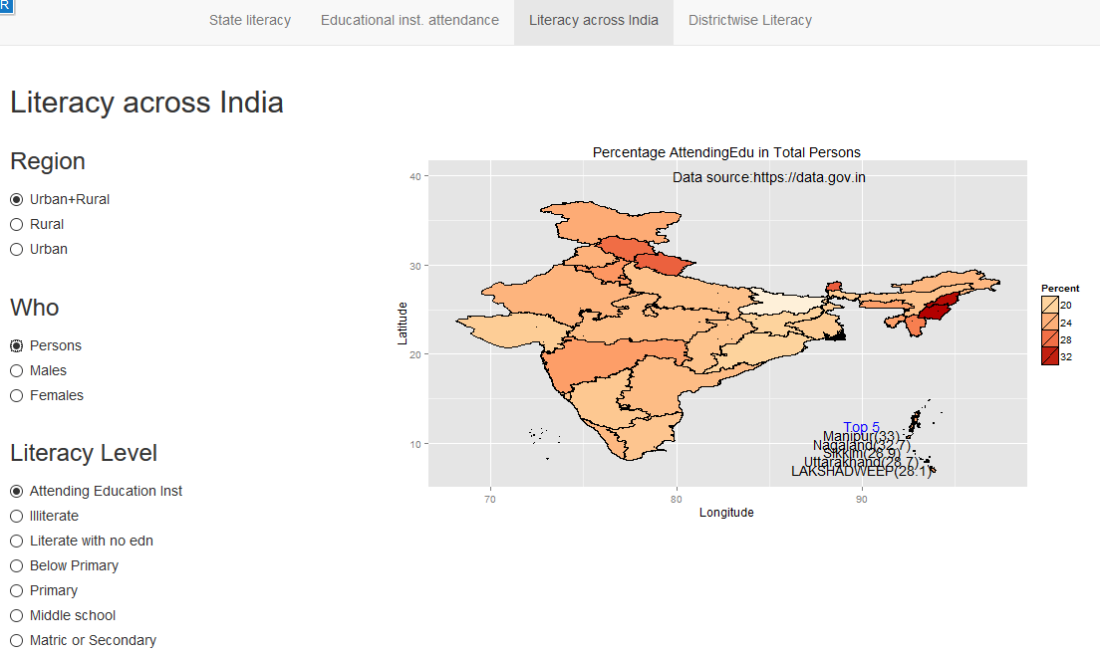 We have heard that Kerala is the most literate state. But  it looks like Manipur, Nagaland, Sikkim actually edge Kerala out. If we look at the State literacy chart for Kerala and Manipur this becomes more clear

4) If we take a look at the District wise literacy for the state of Bihar we see that the literacy is lower in the north eastern districts.,

5) Here is another interesting observation I made. The top 3 states which are most ‘literate with no education’ are i) Rajasthan ii) Madhya Pradesh iii) Chhattisgarh

While I have included several charts with accompanying explanation, this is largely unnecessary as  most of the charts are self-explanatory.

24 thoughts on “Literacy in India – A deepR dive”